An amateur sleuth named Bonnie and her kitty companion Clyde, with names like those, what could possibly go wrong?

Life hasn't sparkled too brightly for Bonnie Balfour over the past few years, but a heart-breaking divorce has brought her back to her small rural hometown of Bliss, Georgia, and things are starting to shape up.

The proud new owner of Bless Her Heart—a second chance dress shop and boutique on the town square—Bonnie thinks thirty-eight might not be too late for a fresh start in life after all.

Until a grouchy old widow turns up dead in a pile of donations meant for Bonnie’s shop, and the town’s new detective pins her to the top of his suspect list!

To save her shop, dream and reputation, Bonnie must coordinate clues and stitch together the truth about her innocence, but the unreasonably handsome detective and prying eyes of the local gossip mill are fast fraying her nerves.

When a series of anonymous attacks begin to hem her in, Bonnie fears the real killer is fixing to make her his next victim. Can this amateur sleuth measure up?

Amazon
Barnes & Noble
Kobo
Apple Books
Google Play
Bookshop
Bonnie & Clyde are at it again!
When the death of a local baker threatens to shred the fabric of their lovely town, this dynamic sleuthing duo bolts into action. The results will leave you in stitches.
It’s summertime in beautiful Bliss, Georgia, and while second chance dress shop owner, Bonnie Balfour, would prefer to spend her time redesigning gowns for the upcoming Founder’s Day parade, her grandma, Gigi, is too hot under the collar to concentrate. It seems Gigi’s former friend is using her recipe to sell cobbler at the local festivities, and she’s claiming Gigi’s treat as her own!
Things go from uncomfortable to downright ugly when Gigi confronts her friend publicly about the unseamly pattern of behavior, only to later find the woman dead! With Gigi’s prints on the murder weapon, and dozens of material witnesses to their earlier scrap, Gigi cuts straight to the top of Sheriff Wright’s suspect list.
Now, Bonnie and her kitty companion, Clyde, must don their sleuthing hats once more.
To mend Gigi’s reputation and deliver justice for the victim, Bonnie must lace together a string of clues about what really happened that night. Will she wind up on the killer’s cutting board in the process?

Amazon
Barnes & Noble
Kobo
Apple Books
Google Play
Bookshop
Bonnie Balfour adores the changing seasons, fabulous fall activities and holiday hoopla, but will a corpse on the porch squash her holiday plans?
Thanksgiving is right around the corner in historic Bliss, Georgia, and Bonnie is trimming display tables at Bless Her Heart, especially for the occasion. A Gift of Gratitude display, beside the front door of her second chance dress shop, encourages shoppers to leave messages of good tidings for neighbors and friends. Unfortunately, someone has left a cornucopia of complaints instead.
And they’re all about Bonnie!
When the scrooge turns out to be a neighbor, fed up with Clyde’s habitual petty theft and trespassing, Bonnie’s claws come out in defense of her kitty. The heated exchange leaves a bad taste in Bonnie’s mouth, but the man turns up dead before she can dish out a proper apology.
Determined to see justice served, Bonnie and Clyde dig into the case with gusto, only to land in hot water with the handsome Sheriff Wright. A series of anonymous attacks soon have the town wondering if Bonnie can find the killer before it’s time to cut the turkey.  Or if she’ll be the next one on his carving board.

Bonnie and Clyde play chicken with a killer in their zaniest adventure yet!
Bonnie Balfour is busy tuning shabby into chic after a local entrepreneur asks for help decorating a soufflé-stand startup on a shoestring budget. The client’s budding egg enterprise and blue-ribbon hen, Thelma, are sure to boost revenue to the new business, especially with Bonnie’s customizing touch on the design.
Unfortunately, feathers begin to fly when the client’s ex-boyfriend launches a dispute over Thelma’s legal custody, only hours before the hen goes missing. And Detective Wright suspects fowl play when the ex’s body turns up in a local lake before sundown.
Now Bonnie and Clyde are pecking on doors and scratching for clues to prove their friend’s innocence, but a series of anonymous attacks threaten to scramble the newly hatched plan. Can Bonnie and Clyde crack the case in time? Or is this sleuthing duo finally out of cluck?

Stabbed in the Rack 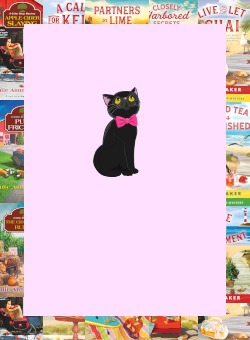